As we commemorate the third anniversary of the passing of the world’s most influential leader of modern times, there is much that we can do to keep his leadership legacy alive and make every day a Madiba Day.

I have spent many years analyzing the leadership legacy of Nelson Mandela and believe that there are three personal leadership lessons we should learn from the Great Icon and incorporate into our daily lives.

Lesson 1: Reflecting on Your Personal Conduct

Remembers Joe Matthews who knew Mandela since their University days at Fort Hare and who was a leader with Mandela in the ANC Youth League: “Once we were detained at No. 4 prison in Johannesburg after our arrest in 1956, and I was sitting next to him and he observed Chief Luthuli who was staring in the distance. Thinking, obviously. And Mandela said to me, ‘Do you see that man? That is the mark of a great man. A man who can think and consider things … a man who stares into the horizon, thinking and so on.’

He obviously respected that kind of thing, and he actually said, ‘That’s the mark of a great man,’ that posture by Luthuli … If you read the accounts of him on Robben Island, you will find people remarking on him having those kind of moments of reflection.” In a letter to his wife Winnie Mandela dated 1 February 1975, Madiba referred to the value of meditation, saying that “You may find that the cell is an ideal place to learn to know yourself, to search realistically and regularly the processes of your own mind and feelings. In judging our progress as individuals we tend to concentrate on external factors such as one’s social position, influence and popularity, wealth and standard of education …. but internal factors may be even more crucial in assessing one’s development as a human being: honesty, sincerity, simplicity, humility, purity, generosity, absence of vanity, readiness to serve your fellow men -qualities within the reach of every soul – are the foundation of one’s spiritual life. If for nothing else, the cell gives you the opportunity to look daily into your entire conduct to overcome the bad and develop whatever is good in you.

“Regular meditation, say of about 15 minutes a day before you turn in, can be fruitful in this regard. You may find it difficult at first to pinpoint the negative factors in your life, but the tenth attempt may reap rich rewards.”

As we live our busy lives, are you making time to reflect and meditate on how you can become a better person? Most importantly, are you using the precious time before going to sleep and the first minutes of waking up to look into your personal leadership mirror and examine yourself?

Throughout his life, Nelson Mandela was driven by a missionary zeal to bring about a truly non-racial, non-sexist South Africa “in which all persons live together and with equal opportunities. It is an ideal which I hope to live for and achieve. But if needs be, it is an ideal for which I am prepared to die.”

Possibly the most famous words of the 20th century, his speech at the Rivonia trial in 1964 so clearly spelt out his vision that it is still remembered today by people all over the world

Today, more than ever, you need to be clear about what difference you are making to the world and building a better future for the next generation. In the world of business, this has become a primary leadership imperative, as 87% of consumers now expect businesses to place at least equal emphasis on societal issues as they do on the bottomline – and only 28% of consumers believe brands are doing enough in this regard.

Says Warren Bennis, founding chairman of the Leadership Institute at the University of Southern California:

“Nothing serves an organization better – especially during these times of agonizing doubts and paralyzing ambiguities – than leadership that knows what it wants and communicates those intentions accurately. “

According to leadership expert Deiric McCann, charismatic leaders always have a sort of missionary zeal – a sense that they know exactly what they want and that they’ll do whatever it takes to get it. In a tough economy one of the first things to go is optimism – closely followed by the ability of many people to pursue their goals. People become frightened and anxious and feel out of control – and when they take their eyes off their goals all they see is doom and gloom.

Throughout his life, Mandela excelled at communicating his mission in the most spectacular way, both verbally and through his body language. On 15 1962, at the start of his trial for inciting a stay away and leaving the country without a passport, Nelson Mandela made a dramatic entrance into the court wearing a Thembu royal costume of leopard skin and beads.

By appearing in court in Xhosa regalia, Mandela used his body as a symbol of royal and moral power. In his closing statement he reinforced this visual cue with a narrative that drew on growing up in a chiefly court in the Transkei, observing what he called traditional “justice in practice”. His mission of restoring the dignity of the African people was echoed in the courtroom by the spectators singing the song Shosholoza Mandela,which paints an image of Mandela as invested with the collective agency of the whole people and propelled by a force of destiny.

Says McCann: “To be inspiring and charismatic your vision must be larger than life – a real stretch, something that would be a real achievement when complete. For example:

It is critical that the way in which you present your vision to your people makes them feel part of something altogether bigger than any one of them – something that will change the world as they know it. If your vision has sufficient gravitas that even being associated with it is a badge of honour then you’re on the right track. Says Herb Kelleher, founder of Southwest Airlines,

“You can buy all of the physical things … but you can’t buy dedication, devotion, loyalty – the feeling you are participating in a crusade.”

What exactly is your Mission? What difference are you making to the world? And what message are you sending out to your followers? When my grand mother turned 100 years, it was remarkable what people had to say about the impact she made on their lives. What do you want people to say at your Centenary?

Lesson 3: Enabling the Law of Expectation 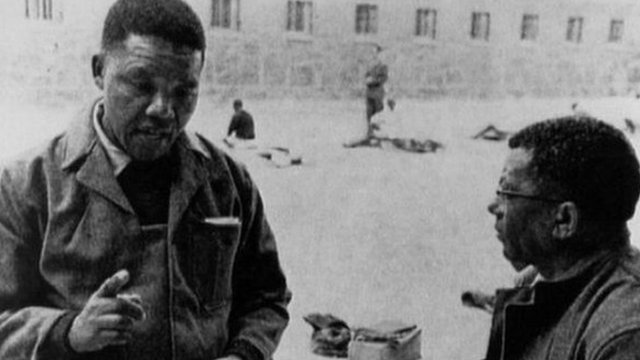 Mandela’s leadership career was greatly influenced by his long-time mentor Walter Sisulu, who saw the potential of greatness at the very first meeting with Mandela and activated what today is known as the Law of Expectation.

Richard Stengel, the editor of Mandela’s autobiography “Long Walk to Freedom”, points out how the law of expectations shaped the first meeting between Mandela and Sisulu.

“When I talked to Walter about what he saw in Nelson, Walter is such a lovely human being, and he almost had this vision that when Nelson Mandela walked into his office, and Walter Sisulu … he’s stocky, but he’s quite a small man. And when Nelson Mandela, this young, strapping, budding attorney, with shoulders as wide as an air force carrier, and this handsome face, and this great posture … he thought, “Here is a king, but here is also a potential leader.”

“What Walter realized as he got to know Nelson, was, “Here is our natural mass leader. I am a leader. I am a short man. I have a soft voice. I am shy. There are other people like me, who are in the ANC and dedicated. I cannot stand in front of a roomful of people and get them excited. This man, this boxer, with a beautiful smile, who is so winning – he is our mass leader. We need to be a mass organization.”

On many occasions, Sisulu communicated his expectation of greatness to his mentee and literally changed the course of his life, when Mandela started to live up the leadership expectations placed in him.

Called the Law of Expectation, this phenomenon has a long history of research and goes all the way back to ancient Greece. Pygmalion was a master sculptor in Greek mythology. Disillusioned by real women, he determined to create a sculpture of a perfect woman in marble. He named his statue Galatea and his love was so impressive that the Greek goddess of love, Aphrodite, took pity on him and brought Galatea to life. All of his expectations of his perfect companion were fulfilled in reality and Pygmalion and Galatea lived happily ever after.

In 1968 a study by researcher Dr Robert Rosenthal showed the impact that others’ expectations have on performance. Teachers were given a list of students, whom they were told had achieved exceptionally high results on IQ tests, indicating extraordinary ability.

This set the teachers’ expectations of those students higher than for other students in their groups. In reality, that list of students was selected completely randomly. As a group they had no higher ability than would be expected of any other randomly selected group of students. No one ever told the children that they were considered high performers.

Nonetheless, they received this message through their teachers’ nonverbal cues like facial expressions, touch, and gestures and through other, more overt, behaviours that communicated their expectations. After just eight months the “high-ability” students were scoring consistently higher than other students in the group.

As a leader, if your expectations are consistently positive and high, then your people’s self-esteem is consistently raised and they are much more likely to engage positively in an attempt to deliver performance consistent with your expectations. The leader who has a high level of belief in their people and high expectations of them is like Pygmalion – sculpting an image of exactly what they perceive as most desirable.

According to Sam Walton, founder of the world’s largest retailer, Wal-Mart,

“Outstanding leaders go out of their way to boost the self-esteem of their personnel. If people believe in themselves, it’s amazing what they can accomplish.”

How are you enabling the Law of Expectation in your own life? Who are you mentoring and whom are you turning to for mentorship? Having a mentor who has your best interest at heart and can guide you with tough love, is possibly one of the greatest enablers of transformational leadership.

Honoring the Leadership Legacy of Madiba

At the farewell ceremony for his friend and mentor, Walter Sisulu, Nelson Mandela issued this call to action:

How Can We pay Madiba’s Legacy Forward?

As we are entering 2017, how can we carry Madiba’s Legacy forward and make his greatest wish come true, to build a Nation of Champions, one person at a time?